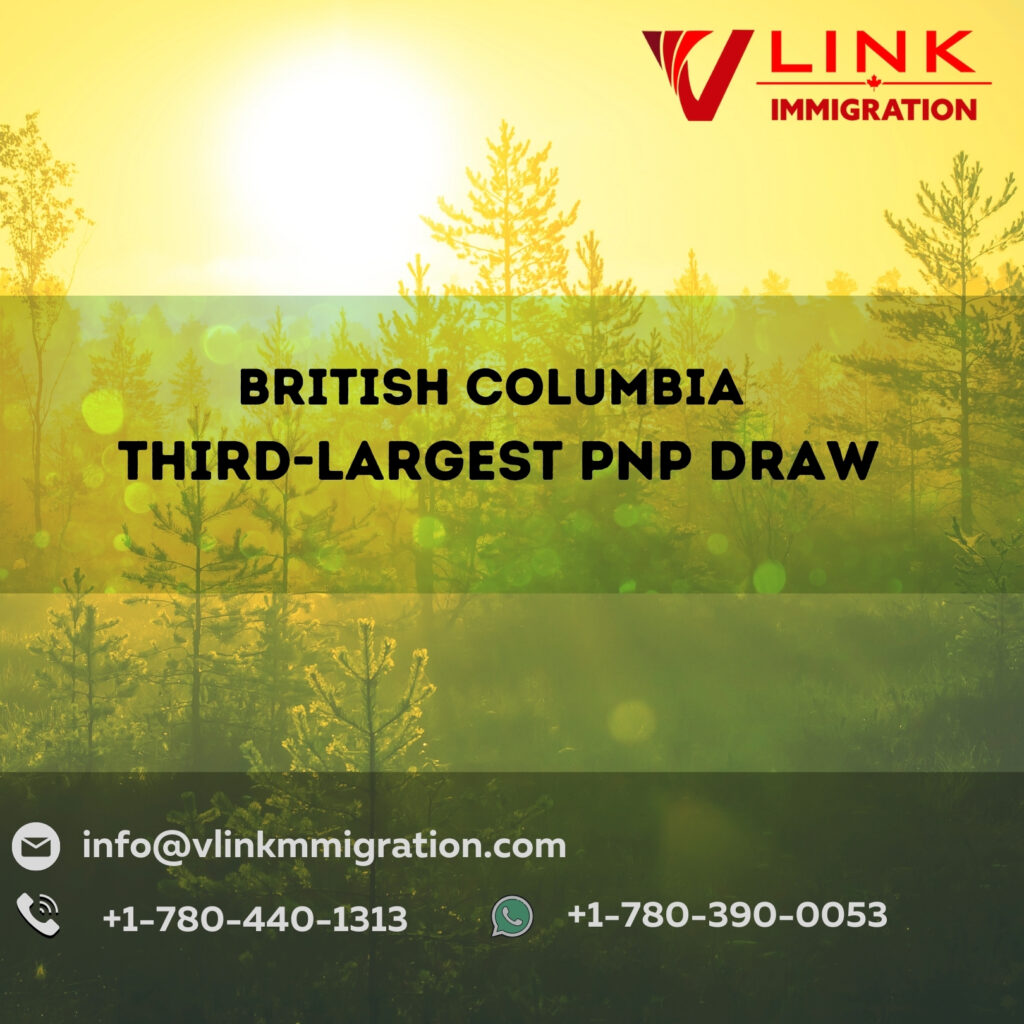 On April 13,  452 immigration candidates were invited by British Columbia in four draws of the Provincial Nominee Program (PNP). The candidate who got their invitations from authorities were mostly from the Skilled Worker and International Graduate category along with the Entry Level and the Semi-Skilled sub-categories of Skills Immigration (SI) and Express Entry BC (EEBC) streams.

For the largest draw, the minimum scores were ranged between 79 and 95 points. the invited immigration candidates for this draw were a total of 420. B.C. also held a separate draw for the fifth time this year British Columbia has conducted the draw for the retail and the managers of wholesale trade (NOC 0621) and restaurant workers and the managers of foodservice (NOC 0631), for the candidates with scores of at least 113, 21 invitations were issued to them. B.C. also issued 11 invitations through the stream called Entrepreneur immigration.

Through Provincial Nominee Program (PNP), British Columbia held 23 rounds of invitations, which brings the total number of invitations that were issued to date to about 3,441  in the year 2021.

The aim of BC PNP is to get the attention of foreign workers who are in high demand in British Columbia and also those candidates who want permanent residency in Canada.

Basically, BC PNP follow two immigration streams that are

both of the streams are divided into sub-categories and are managed under British Columbia‘s  Skills Immigration Registration System (SIRS). If a candidate to apply for SIRS, then you need to first register for the account. Once you are done with the registration process, then you will get an assigned score that will be based on certain factors such as

The candidates with the highest scores from each sub-category will be then invited so as to apply for the provincial nomination program by which they can apply for their permanent residency in Canada at the time when one of the regular draws is conducted by British Columbia. If the candidate receives an invitation, then you will get 30 days from the date when you get your invitation so that you can submit your complete application using the system called BC PNP system through online mode.

Once a candidate submits their complete application of the BC PNP application package, then you will get notified of the decision of British Columbia within two to three months approximately. If you get successfully nominated, then you will become eligible to apply for permanent residency to Immigration, Refugee, and Citizenship Canada (IRCC) through the Provincial Nominee Class. This nomination is valid up to six months approximately from the confirmation date.

The Express Entry BC (EEBC) is the stream that connects you to the immigration system of application management for federal Express Entry. Express Entry The candidates under Express Entry are provided points based on factors of human capital such as work, education, age, experience, and proficient language skill in either English or French as per the Comprehensive Ranking System (CRS). They also have to meet the IRCC’s  minimum criteria for the Express Entry programs:

The provincial nominee has to score high enough as they will also receive additional 600 points under CRS so as to receive Invitation to Apply (ITA) at the time of subsequent draw of federal Express Entry. Yesterday, an Express Entry draw was held by immigration, Refugee, and Citizenship Canada (IRCC) and it is expected that this week they will hold another one. Provincial Nomination Program (PNP) has continuously operated throughout the pandemic.

We hope you like our article on the Third-largest PNP draw held by British Columbia of 2021. In case you have any queries related to the immigration process to Canada, please feel free to contact us. Our best immigration lawyers in Canada will assess your profile and give you the best suitable options.