As mentioned, Canada highly relies on immigrants for the economic and social development of the country. Also, the labor shortages are filled by welcoming more foreign workers. So, there are several immigration plans for people from different categories and new immigration programs are also introduced timely. People migrate to Canada through different categories like study, work, and permanent residence.

Moreover, in 2023 there are some changes that are going to be made in different immigration programs to welcome more people to Canada. So, in this post, we will have a look at how different immigration plans will work in 2023. Furthermore, the backlog will also continue to reduce in 2023. As there are additional fundings being provided to reduce application inventories. As a result, Canada might come back to its standard processing time in 2023.

If you want to know more about this target express entry draws 2023 CLICK HERE.

Provincial Nominee Program (PNP) is a province-specific immigration pathway. People get nominated by a specific province for permanent residency for that particular province. And, people then need to work and live in that province. The requirements for PNP are lesser as compared to express entry. Therefore, a large number of people are attracted to this Canadian immigration plan. As a result, PNP is becoming the top immigration pathway in Canada. Furthermore, PNP is likely to invite 23,000 more immigrants than the express entry in 2023. 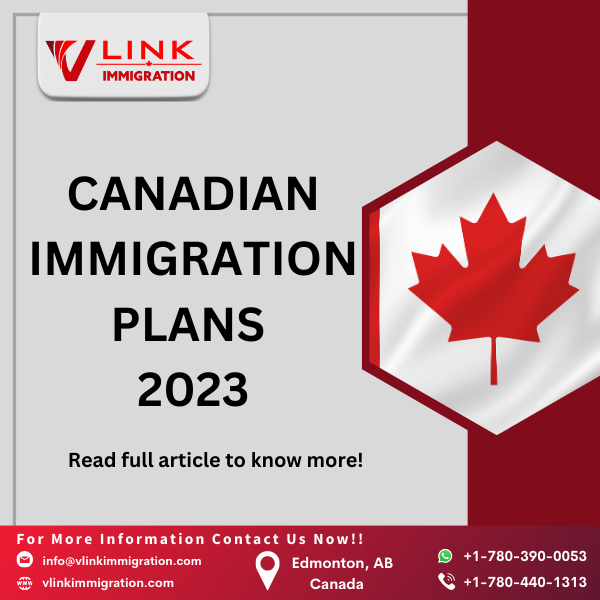 In 2023, Canada is going to aim at uniting families. And, this is evident by the fact that the Parents and Grandparents Program is becoming more popular among people. According to Canada’s Immigration Plans, it will welcome 28,000 new people through this immigration program.

We hope that you found this article about Canadian Immigration Plans 2023 | Immigration Pathways Overview informational. If in case you have questions/queries related to any immigration program to Canada, please schedule an appointment with us. Our best immigration lawyers from VLink Immigration Canada will validate the profile as per the Immigration Program which is best suitable for you.