Overview of Canada’s PNP Immigration Results for November 2021: The Canadian Province Nominee Program (PNP) issued approximately 3,000 invitations in November to apply for a province nomination. Almost every Canadian province and territory has its own province nominee program (PNP), with the exception of Nunavut and Quebec, which operate their own immigration programs.

A unique immigration program allows state governments to select immigrant candidates who meet the needs of the local labor market and manage the regional settlement of the immigrant population within their jurisdiction. Each state has its own criteria for selecting foreign workers who are eligible to live permanently in Canada under their PNP.

PNP complements the federal immigration program and enables provinces of Canada to play an important role in immigration choices. Since its inception in 1998, PNP is Canada’s second most common permanent residence permit. And by 2023, PNP alone would be accepting more than 80,000 migrants annually as permanent residents.

Every state that operates PNP has at least one stream connected to Canada’s major economic immigration route, the Federal Express Entry System.
This year, the Canadian Immigration, Refugees and Citizens (IRCC) conducted PNP-specific express entries every two weeks on average.
In November, the IRCC held two express entry draws for PNP candidates with 775 ITA issued on November 10 and an additional 613 issued on November 24.

Since mid-September, IRCC has only implemented drawings in the PNP category. Also this year, 23 PNP-specific draws were held.  Consequently, 13,000 candidates were invited.
In November, the Ontario Immigration Nominee Program (OINP) did not issue an invitation through the PNP Stream. This suggests that the state may have reached the 2021 nomination rate. 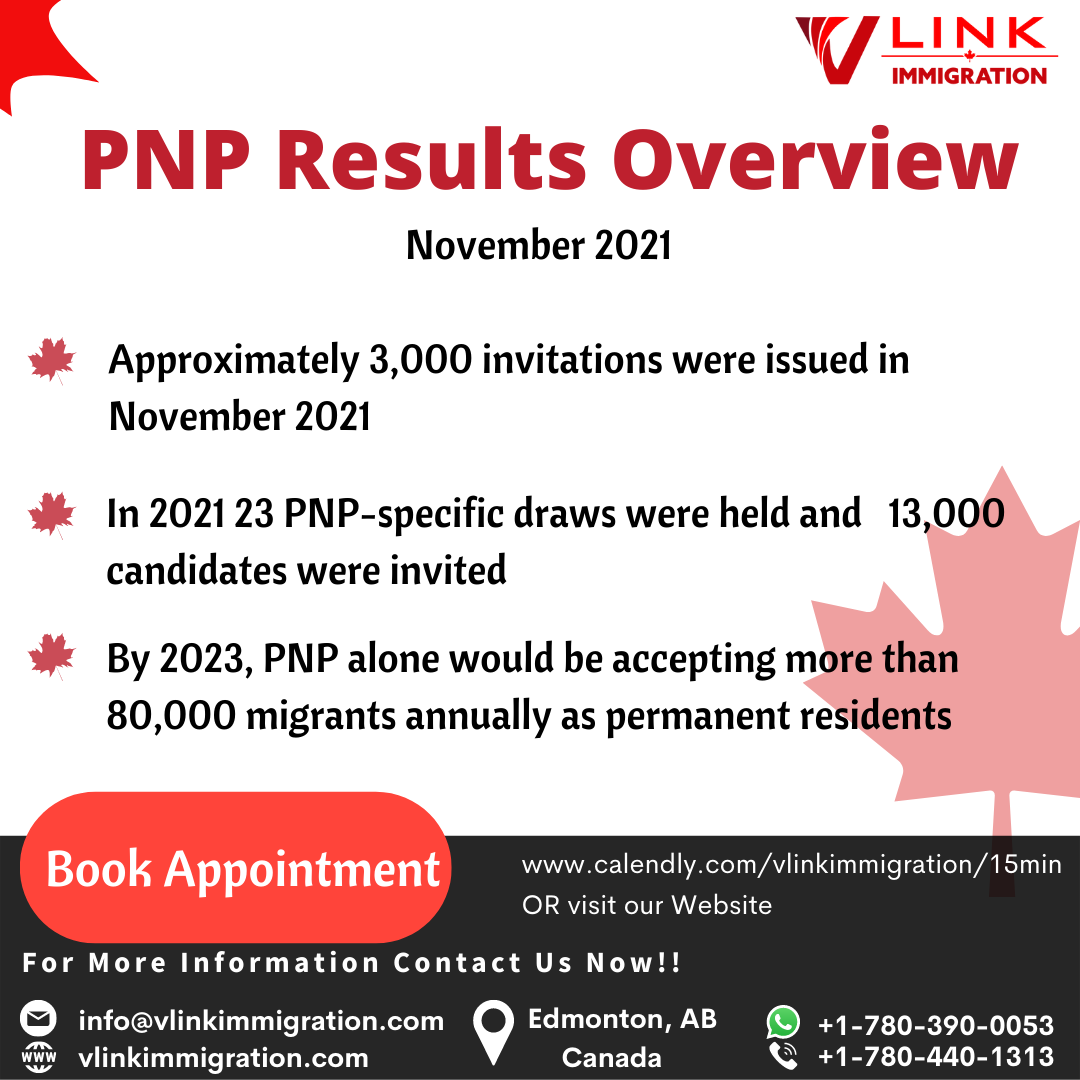 Last month, British Columbia held a total of six draws, inviting 861 candidates to apply for state nominations through Express Entry British Columbia and the Skills Immigration Stream. This is equivalent to the number of invitations issued each month from the beginning of the year

Last month, Manitoba held two draws in three streams: International Education Branch, Manitoba Skilled Workers, and Overseas Skilled Workers. The lottery was held on November 1st and 18th. Consequently, a total of 849 letters of recommendation were issued, of which 143 were issued to candidates who provided a valid Express Entry Profile.

Prince Edward Island held a large draw on November 18th and issued a total of 188 invitations to immigrant candidates. Consequently, Out of which 172, was given to candidates for Express Entry and Labor Impact. The remaining 16 invitations were sent to business impact candidates with a minimum score of 67. PEI has held 11 draws this year and received a total of 1,729 invitations.

So far, in November, the Alberta Immigration Nominee Program (AINP) Express Entry Stream has hosted an invitation round. Also, AINP drew a lot on November 9th and invited 200 candidates with a CRS score of 343 or higher.

In November, the Saskatchewan Immigration Nominee Program (SINP) hosted the largest invitations of the year. It was across the ExpressEntry and Occupations InDemand subcategories of the International Skilled Workers category. As a result, there were a total of 633 invitations to apply for state nominations. For the first time invitation were issued in both subcategories after a one-month break.
Also, SINP announced that it will launch a new pilot program in December 2021 to help employers recruit international talent for specific vocational groups. The sectors with the highest labor demand include healthcare, manufacturing, agriculture, agricultural engineering, construction, hospitality, and retail. To qualify, candidates for the new Hard-To-Fill Skills pilot must have a full-time position. Also, a minimum level of proficiency in the official Canadian language, and a minimum of training and work experience.

Vlink provides you with the best immigration lawyers in Edmonton.

We hope that you will like our article Overview of Canada’s PNP Immigration Results for November 2021. In case you have any queries related to the immigration process to Canada, please feel free to contact us. Our best immigration lawyers in Canada will assess your profile and give you the best suitable option.